Home / World / Babchenko's wife was at the height of 'murder' 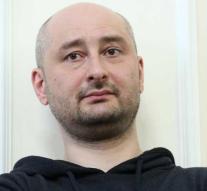 kiev - The Russian journalist Arkadi Babchenko, whose death was staged in Kiev to thwart an attack on his life by a hit man, told Thursday that pig's blood and a make-up artist were used to make the shooting seem real. His wife and some close relatives were informed of this.

Babchenko said that he was taken to a mortuary in a hospital from his home in an ambulance, with nurses who were also in the conspiracy. He put on clean clothes and followed the news on TV.

The war correspondent, who has always been critical of the Russian government, has no evidence that the murder plot is a fabrication of the Ukrainian secret service to provoke the Russians. He was warned in 2017 that he was in danger. That was reason to leave Russia.