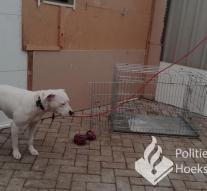 rotterdam - The police of Hoeksche Waard has seized a neglected dog at a hard-wearing dog.

For the second time it was found that the dog had not been given food and drink at all times. The owner has been warned several times, according to the police. This week she found him tied to a bench.

The other railless owner, goes on the receipt.