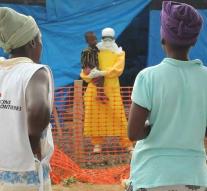 amsterdam - Two patients who were treated at the hospital in Congolese Bikoro after being infected with Ebola have been cured and are allowed to go home today. That is what Gert Verdonck, MSF team coordinator, talks to De Telegraaf.

' That is an important positive boost for all people who are working to combat the epidemic, 'says the Belgian nurse from the hospital in the village where the latest Ebola outbreak came to light.

Such a bright spot comes as called, because unlike previous outbreaks, the highly contagious virus threatens to spread rapidly. 'Back then, the infection spots were often located in remote areas. Now cases have already been detected in the big city of Mbandaka, further along the large Congo river. 'This city is an important trade center for the region.

Teams of AzG are active in Mbadaka as well as in Bikoro, each of which is more than 30 people. They work together with specialists from the World Health Organization WHO and the Congolese Ministry of Health. In the hospital of Bikoro a special department has been built, shielded from others, in which now 6 patients are treated. In another separate part of the hospital, people are diagnosed with symptoms of the disease, such as fever. In Bikoro and Mbandaka it involves a total of 45 people.

It is a difficult task to get the necessary tools on site, says Verdonck. 'The most important road has been blocked for months because a number of bridges are broken. This means that all items must be delivered by helicopter. '

The WHO wants to start in Mbandaka with a so-called ring vaccination with an experimental vaccine. That drug protects against the infection, it has not yet been proven that it can also cure.

'We can not put all our hopes on that,' Verdonck explains, 'that's why we use all the classic methods to control the disease. This involves identifying new cases as quickly as possible, taking care of these people and informing their environment what they should and should not do to prevent the spread. This sensibilisation takes a lot of time and energy, you have to repeat that message before it lasts. It is also very nice with that work that we can now tell you that the first people are healed. '