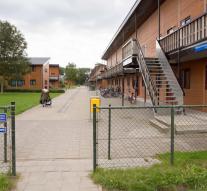 A 19 - year-old man has been arrested in Egypt . Probably there are several culprits involved. No one was injured. The existing refugees could get away on time.

Preliminary research shows that prior to the fire was a quarrel between the Egyptian and other asylum seekers about using the bathroom.

According to an eyewitness from Ghana would also have a knife drawn . The containers, each suitable for two people have become uninhabitable.