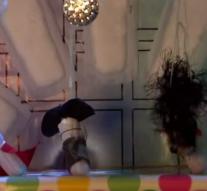 stockholm - Swedish television teaches young girls that are quite special way about their periods. In a television clip menstruation is explained on the basis of 'dancing tampons .

In the TV clip sings presenter Alex Hermansson that women " should be proud of their menstruation ," and he praises the period : " Hurrah, hurray for the time of the month " !

Hermansson defends his actions in an interview with Swedish newspaper , in which he says that he thinks it is fine and cool to informally educate people .