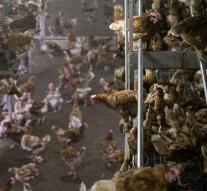 - The highly infectious Influenza A virus subtype H5N8 virus, according to a scientific institute also found in wild birds on the island Riems the Baltic coast of Germany. Mecklenburg-Vorpommern and Schleswig-Holstein have been infected poultry.

For Tuesday is a crisis meeting planned with the German agricultural authorities and representatives of veterinarians and other experts. Thereby possibly also comes an indoor confinement for over Germany discussed. Agriculture Minister Christian Schmidt decided to start this at least with the preparations. 'We take the spread of bird flu in Germany very seriously,' he said.

Because bird flu is true in the Netherlands recently an indoor confinement of poultry farms.