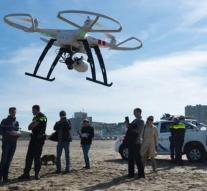 the hague - Defense, the police and the fire department want to work together more in the area of ​​drones. Unmanned airplanes are becoming more and more important for emergency services. Representatives of the army, police and fire brigade sign their signature on Friday at the former Twente airport under a letter of intent for more cooperation.

It is not just about the deployment of drones, but also for the maintenance of unmanned appliances, training and training for employees and the acquisition of new knowledge.

According to Brandweer Nederland, the possibilities of drones are 'infinite'. 'This way they can help detect and fight fires, detecting chemicals, fire investigations or finding drownings. '

The National Police Unit has been testing drones for a long time. In East Netherlands they fly around October 1st. Drones are going to take photographs of the crime scene after a crime. They are also deployed after traffic accidents.