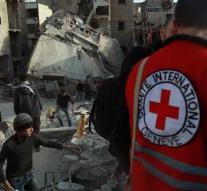 geneva - A convoy of relief goods has left the city of Douma in Oost-Ghouta for safety reasons. 'They have unloaded as much as possible under the conditions on the spot \u0026 # x27 ;, #,' said a spokeswoman for the International Committee of the Red Cross (ICRC).

The visit of the aid workers was accompanied by artillery bombardments on the city. ' The team is safe, but because of the security situation it is decided to return for the time being, '' said the spokeswoman. The convoy consisted of more than forty trucks and transported relief supplies for over 27,000 people in the besieged enclave.

One source told the Reuters news agency that ten trucks remained unbroken. The relief supplies in four other trucks would have been partially unloaded. The cars would meanwhile be on their way to the capital Damascus.