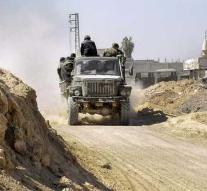 beirut - A convoy of relief goods was in the besieged region of East Ghouta near the Syrian capital Damascus on Friday and all goods were unloaded. This has been announced by the Red Cross. The thirteen trucks have since returned from Douma, the largest place in the area that has been surrounded for years.

East Ghouta was once the eastern part of a fertile agricultural area that 'nourished' nearby Damascus. Since the 1980s, this green zone has become more and more strewn with residential areas or suburbs.