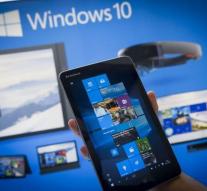 - Microsoft comes in early November with a major update for Windows 10. That says at least Paul Thurrott, a usually well-established Windows expert, on his website.

The browser Edge has also been improved in some respects, just come there is no add-ons for Internet program available. There is a lot of resistance to the new program because there is no download for some expansion.

The autumn update will be distributed in the usual way, via Windows Update.