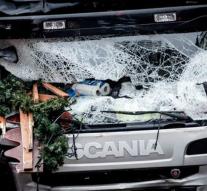 berlin - The truck that the attack on the Christmas market is held in Berlin, according to German media was equipped with an automatic braking system. Thanks to emergency braking the truck was 70 to 80 meters after the first crash to a halt, reported include the Sueddeutsche Zeitung on Wednesday. The newspaper relied on sources close to the investigation team.

' This technique has saved lives, '' said a source. The newspaper recalls the similar attack in Nice, where last summer more than eighty people were killed. In Berlin were twelve deaths.

After the terrorist act has been much speculation about possible intervention by the Polish driver. But the research team suspect now that he was shot shortly before the attack by the offender in his head.