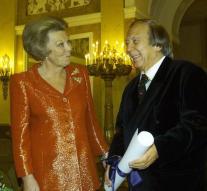 maldegem - The Flemish writer Paul de Wispelaere is deceased at the age of 88. Said his wife Sunday.

The Wispelaere debuted in 1958 with the short story Scherzando ma no troppo. That work he followed by more than twenty novels, essays, travelogues and diaries. He received over the years numerous awards, including the Dutch Literature Prize was the main award in 1998.

writing books was not the only activity of De Wispelaere. He also worked as an editor of literary magazines, as a critic and was professor of Dutch literature at the then University of Antwerp. The Wispelaere himself had studied Germanic philology at Ghent and was a PhD with a thesis on the Dutch playwright and essayist Dirk Coster.