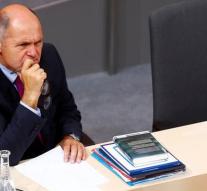 growth market - The Austrian Minister of the Interior has been involved in his car in a serious road accident on Saturday evening. According to Austrian media, the driver of Wolfgang Sobotka had to turn off on a provincial road at Völkermarkt for crossing game.