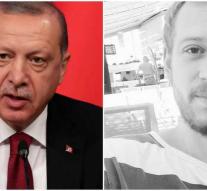 ankara/vienna - The Austrian journalist Max Zirngast has been arrested in Turkey. The police stopped him early Tuesday morning in Ankara. Apart from Zirngast, who wrote several critical articles about the Turkish president Recep Tayyip Erdogan, two Turkish citizens were arrested.

The arrest was announced by employers of Zirngast and the Austrian Ministry of Foreign Affairs confirmed that an Austrian had been arrested in Turkey. 'Our embassy in Ankara is already in contact with the family and the Turkish authorities. '

The left magazine re: volt brought the news of the arrest first. 'This morning at 5 o'clock our comrade and author Max Zirngast and other people in Ankara were arrested by the anti-terrorist department', according to the magazine. 'Complaint, of course: Terror !!!'