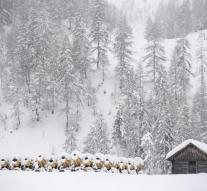 salzburg - In Austria, the risk of avalanches so great that the country speaks of 'tricky' situation in the mountains. This weekend there is a meter snow. Länder Vorarlberg and Tyrol have raised the avalanche risk to level 4. That level comes just a few days a year. Definitely above 2000 meters is the danger of large avalanches that come down into the valley extremely high. In the lower areas, the risk of avalanches sharply. The risk of avalanches is so great because there are a lot of new snow on an old and inadequate snow cover has fallen. Off-piste skiing is also severely discouraged.

Traffic had in Austria also greatly affected by the snowfall. Twice the Fernpass Saturday was closed because of the snow. The pass is an important link between Germany and Austria. On the highways were long queues and there occurred serious accidents. Also had to ski a World Cup race in Altenmarkt-Zauchensee Saturday are canceled due to weather conditions.