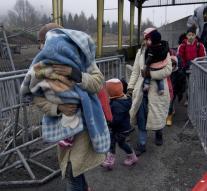 amsterdam - Austria also sets a limit on the number of asylum seekers it can absorb. More than 100,000 this year expects the Alpine can not, said Vice Chancellor Reinhold Mitterlehner.


'Much more is simply impossible,' said the conservative politician. Hundreds of thousands of immigrants this year drawn in Austria. The country lies on the route from the Balkans to favorite destinations like Germany, the Netherlands and Sweden. Around 95 000 people have actually applied for asylum in Austria. In 2014 there were only 28 000 asylum applications.
The head of government of 'big brother' of Germany, Angela Merkel, promised earlier, 'the number of refugees to push back noticeably.' Mitterlehner and Chancellor Werner Faymann Austrian want to prevent migrants now halt in Austria. Faymann said Saturday that his country relying more efforts to return failed asylum seekers.
NEW