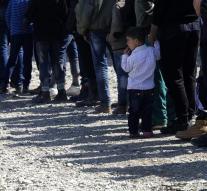 ljubljana - The European Union should send a team of military and civilian personnel to Greece to help monitor the Greek borders. That said, the Austrian Minister of Defense Monday. According to him, the EU's Frontex border guard service too slow.

Hanspeter Doskozil calls for a mission that helps until Frontex has been strengthened by the registration or repatriation of refugees in Greece, and is able to carry out the deal between the EU and Turkey.

Greece is home to approximately 43 000 refugees and there are always people coming, despite the deal that should stop the influx. According to this agreement Turkey shall anyone who illegally make the crossing to Greece again. In return, the EU takes thousands of Syrian refugees in Turkey.