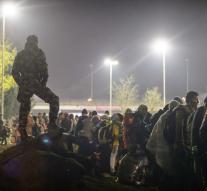 - Austria is building a fence along the border with Slovenia to direct the flow of refugees in the right direction. Austrian media reports said. The fence at the border crossing at Spielfeld is 3.7 kilometers long and should be ready by the end of the year.

The Austrian government announced plans on Friday. The plan is to introduce a rasterhek. For emergencies are rolls of barbed wire on hand held, there were suddenly huge hordes of displaced persons at the same time the border to stabbing over.

Within the Austrian Government is intense debate about the fence and there is a compromise. Initially, because there is a fence of 25 kilometers.