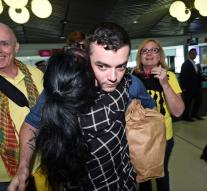 canberra - An Australian with Kurdish fighters in Syria has fought against terrorist organization Islamic State (ISIS) is back in his homeland. The 23-year-old Ashley Dyball was arrested last week in Germany because of his activities in the Middle East.

Dyball was interrogated by the Australian police and released, the BBC reported Monday. It is banned in Australia to fight foreign movements. That law was designed primarily to try people who travel to the Middle East to join terrorist groups.

There still under investigation Dyball. He has not been charged and is allowed to go to his house is Brisbane back. The family of Dyball asking the Australian Government to amnesty. Scott Dyball calls his son and his Australian friend, who died in June at fire fighting in Syria, heroes.