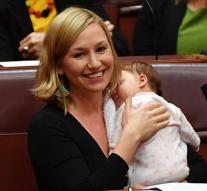 - The Australian senator Larissa Waters has given birth to breastfeeding in the building of parliament as the first politician. She believes that more mothers in politics are needed.

While the politicians expressed their voice on a subject, Larissa Waters gave her baby's breast for two months.

It has been allowed to breastfeed in the Parliament building since 2016, but no one had used any of the mothers before.

'I am so proud that my daughter Alia is the first baby to breastfeed in parliament!', Politicians write on Facebook. She immediately set the picture of the special scene as a profile picture.