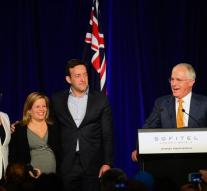 sydney - The center-right government coalition of Prime Minister Malcolm Turnbull looks at the Australian parliamentary election to have lost the majority. In the standings, he can only count on 68 seats in the House of Representatives, which has 150 members.

The final results are expected no earlier than Tuesday, when even the postal votes cast are counted, but possibly later in the week. Opposition leader Bill Shorten fourth provisional results Sunday as winner. His Labor Party is according to the latest forecast from 55 to 70 seats. Five other seats will be occupied by independents and Greens.

The government of the Liberal leader Turnbull had 90 seats. An internal party revolt and policies were punished, which now threatens a stalemate.