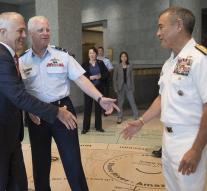 the hague - The Netherlands honored the Supreme Commander of the Australian Army on Thursday with a special award for his deployment after crash MH17. Commandant of the Armed Forces Tom Middendorp drew his colleague Mark Binskin the embellishments of the commander in the Order of Orange-Nassau, with the swords. This award is only awarded every four to five years.

Binskin showed, according to Middle East leadership, after flight MH17 was dropped above Eastern Ukraine. Of the 298 victims, 196 came from the Netherlands and 38 from Australia.

Under severe circumstances, the Australian Armed Forces worked intensively with the Dutch to get the physical remains to the Netherlands. Binskin has continued for years to improve cooperation between both armed forces.

Middendorp awarded the award to the Ministry of Defense in The Hague. He praised the Australian Air Marshal for his 'attitude and excellent sense of international relations. '