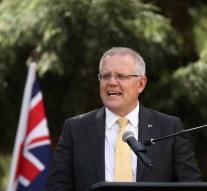 canberra - The government of Australia wants extremists to be able to deprive the Australian nationality more quickly. That is only now possible if they have been sentenced to a prison sentence of at least six years. 'We're going to delete that requirement,' said premier Scott Morrison according to broadcaster ABC.

Morrison says that the current rules are 'unrealistic' and need to be adjusted. The government is likely to come up with new legislation within a few weeks. It must make it possible to deprive people of their passport after a conviction for a terrorist offense. The condition is that they have another nationality to fall back on.