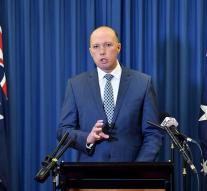 canberra - The Australian government will pay a $ 70 million fee (about 47 million euros) to a group of asylum seekers. According to Australian media, they claim to be psychologically and physically damaged by their stay in a controversial shelter on the Isle of Manus.

The government earlier stressed not to blame, but rather to settle the matter than to bring it to court. Minister Peter Dutton (Immigration) said at the time that 'a settlement is a sensible outcome for the Australian taxpayer. '

The court approved the settlement Wednesday. Judge Cameron Macaulay called the amount of 70 million 'fair and reasonable. 'According to the immigrants' lawyers, there is a record amount in such a case.

Australia started in 2001 with setting up detention centers outside its own territory. That had to discourage asylum seekers to cross the boat. The camps are controversial. For example, the UN alarmed the bad conditions under which migrants stuck on Manus, an island belonging to Papua New Guinea.