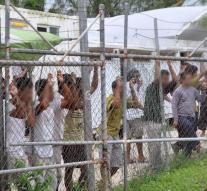 In the detention center riots broke several times, including when asylum seekers trying to escape.