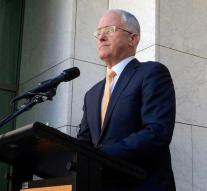 sydney - Australia braces for parliamentary elections Saturday whose outcome is completely uncertain. Prime Minister Malcolm Turnbull warned of economic chaos if his gamble on early elections brings him no absolute majority he needs to carry out major reforms.

The leader of the conservative coalition of Australia disbanded both houses of parliament in May to force early elections. He accused them in the Senate independent members to block his reform agenda. New polls on Friday show that the elections could provide an even more stubborn upper house.

Turnbull suggested Friday that the small parties possibly in coalition with the center-left Labor, not an economy is to entrust being hampered by a downturn in the mining industry and public finances after years of deficits.


The prime minister acknowledged, however, that the election campaign 'will be a neck-and-neck race '' and urged voters not to be indifferent.' This is no time for a protest vote. This is a time to see your vote as the only vote that will determine the next government, '' Turnbull told reporters in Sydney.

The coalition Turnbull faces strong headwinds from Labor, but also independents and small parties such as the Greens, who could win enough seats to maintain the balance of power in the Senate or to form a minority government.

According to a poll by Fairfax / Ipsos Labor and the coalition government on Friday go hand in hand (50-50). A poll by Galaxy shows a similar picture, where the coalition is doing slightly better (51-49).


Turnbulls own grip on power seems shaky, now 27 percent of the electorate intends to vote for a party other than Labor or the coalition.