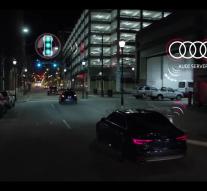 - This autumn Audi comes with a new 'vehicle-to-infrastructure' service (V2I) that information on traffic can be received by cars.

This so-called Traffic Light Information System can communicate with traffic lights, so the car knows when the traffic light turns green. This information is then shown with a countdown display on the instrument.

This concerns primarily to certain cities in the United States. Nbsp; Audi Q7, A4 and A4 Allroad model year 2017 (built after June 1, 2016) will be able to use the option. Nbsp; there should also be paid to use this feature, since this is a nbsp; called Audi Connect Prime feature that runs over a data connection.


This step is for Audi also important in the development direction of the autonomous driving car. In the near future, this communication should already be integrated into navigation systems and start-stop functionality. In addition, it must improve the flow of traffic in urban areas.