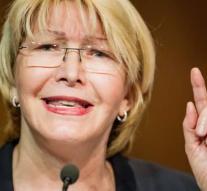 caracas - Venezuelan Attorney General Luisa Ortega Díaz has opposed the government's plan to proclaim elections for a constitutional assembly. This is in her view contrary to the constitution and she has asked the supreme court to propose a stick.

In protests against the plan of Socialist President Nicolás Maduro, 68 deaths have fallen. The opposition rejects the plan and instead wants general elections.

Attorney General Ortega argues that a referendum on convening a constitutional assembly must first be convened. This also happened before the last constitution amendment, in 1999 under President Hugo Chávez.

With the Attorney General, part of the judicial apparatus in Venezuela is facing Maduro. In parliament, the opposition is already in the majority. The supreme court of law has so far been on the side of the socialists.