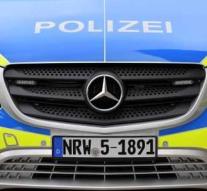 Under the name 'Northern Eagle' they want to revive National Socialism in Germany. The group tried to purchase weapons and ammunition and had plans to attack political opponents.