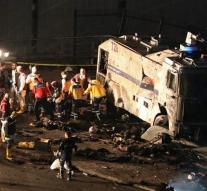 - Turkish Deputy Prime Minister Numan Kurtulmus think that the labor movement banned PKK was behind the attacks in Istanbul which Saturday 29 people were killed. This was reported by the state news agency Anadolu Sunday.

In the attacks a car was used and that points according Kurtulmus on the PKK. That car was loaded with 300 to 400 kilograms of explosives and was placed at the stadium of soccer club Besiktas detonated. Among the dead were 27 policemen.