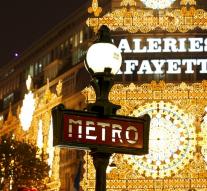 - Since the attacks of last Friday many Parisians shun public transport. The public transport operator in the French capital, RATP, reports a passenger decline of 10 percent compared to a normal working week. That amounts to half a million passengers.

People who normally the metro or the bus would take steps now flocking into the car. That led to additional traffic jams around Paris, with a record of 529 kilometers on Tuesday. Also Thursday morning, the morning was extremely busy, reports the Traffic Information Service (VID).

A curious detail is that one of the terrorists who massacres in Bataclan concert hall, Samy Amimour, more than a year worked at the RATP. He was a bus driver in 2011 and 2012.