Home / World / Attacking the US embassy in Ankara 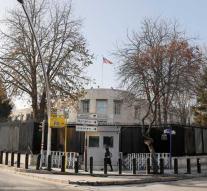 istanbul - Unknown people have attacked the embassy of the United States in the Turkish capital Ankara with gunshots. This reported several Turkish media. The shots were fired from a moving car.

Some bullets hit a guard post, but nobody was injured. It is not known how many shooters it is. The car from which was shot managed to escape.

Relations between the US and Turkey are currently very tense. The governments of both countries have a conflict about the American reverend Andrew Brunson, who is being held in Turkey on charges of terrorism.

The US recently imposed sanctions and penalties on Turkey as a means of pressure to free Brunson. As a result, the national currency, the lira, has fallen sharply in recent times. President Recep Tayyip Erdogan speaks of an 'economic war'.