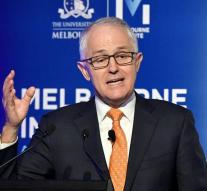 sydney - The Australian anti-terrorist police have launched attacks in several suburbs of Sydney in order to disrupt plans for 'terrorist attacks'. According to the police, the incidents in four suburbs of the city are part of 'an ongoing investigation.'

'These operations are intended to disrupt and prevent plans for terrorist attacks in Australia,' declared Prime Minister Malcolm Turnbull. 'The population must be assured that our security and intelligence agencies work tirelessly for our safety,' added Turnbull. His office did not want to provide further information as long as the operation is under way.

Australia has been in the highest state of preparedness since 2014 against possible attacks by militants returning from the Middle East fights.