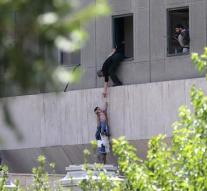 The Iranian Deputy Minister of the Interior had previously said to the press office Tasnim that there had already been an assassin in parliament and that a second blow himself up. Shortly afterwards, the State Broadcaster IRIB reported that all four attackers in the parliament building were dead.

The terrorists dressed as a woman when they stormed the property. An attack on Khomeini's mausoleum had already passed when the attackers were turned off. One attacker blew up and another shot dead. Two others also found death.