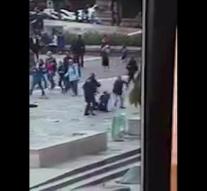 paris - The attack with a hammer on a police officer for the Notre Dame in Paris was a terrorist act. According to the Public Prosecutor's Office, the 40-year-old man has been influenced by Islamic State propaganda and therefore passed this action. Numerous jihadist documents have been found on Algerian's computer.

The suspect, who could be turned off quickly, has told him that he is self-employed and very quickly radicalized via the internet. He went to court on the square in front of the famous cathedral with a hammer, 'this is for Syria,' shouting. Another agent shot him down. Investigators later found a video with a support letter for IS in the home of the suspect.