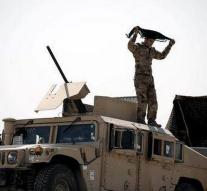 beirut - Russian fighter aircraft bombarded militant militants of the Syrian Democratic Armed Forces (SDF), not far from an oil field in eastern Syria. This reported the US-supported SDF. The air attack was in the province of Deir al-Zor.

The SDF mainly consists of Kurdish warriors from Syria, but also Arab militias are part of it. They fight in Deir al-Zor on the left bank of the River Euphrates against Islamic State.

Near to the right bank of the river, the forces are loyal to Syrian President Bashar al-Assad with Russian air support engaged in an own offensive against IS.