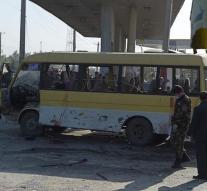 kabul - In an attack on buses with newly graduated cadets waved to the police on the outskirts of the Afghan capital Kabul on Thursday least 27 officers slain. Around forty people were injured, police said.

The three buses were under military supervision of Wardak province to Kabul. According to a preliminary investigation, the attack was carried out by two suicide bombers.

Over a week ago Fourteen people were slain in an attack on a bus carrying Nepalese guards at the Canadian Embassy in Kabul. In April, fell in an attack by the Taliban on an office of the security in Kabul, 64 dead. It was the deadliest bombing in the Afghan capital since 2011.