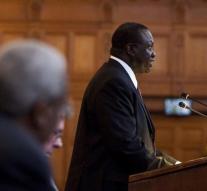 juba - The home of the South Sudanese vice president and former rebel leader Riek Machar Sunday attacked by supporters of President Salva Kiir. That said a spokesman Machar. The capital Juba has already days the scene of violence.

Fighting between supporters of Kiir and Machar have since Thursday sure 272 people killed, including 33 civilians, said a source in the government Sunday. Many civilians fled to a local base of the United Nations. Observers fear that the civil war that broke out in 2013 after Kiir Machar had sent out of the lane, will again erupt in full force. Kiir and Machar just recently signed an agreement intended to bring an end to the violence.