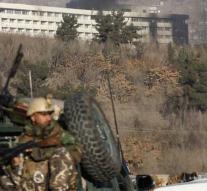 kabul - At the Hotel Intercontinental in the Afghan capital Kabul, shots can still be heard in the morning after Saturday night armed attackers had invaded the hotel. The Afghan Interior Ministry reports that at least five civilians were killed and six people were injured.

According to the ministry, four attackers entered the hotel shortly after 9:00 PM local time and set fire in the kitchen. Then they went further into the hotel and were entrenched on one of the upper floors. The ministry reports that two attackers have been killed by special units.

The security services try to secure the rest of the hotel and free guests who are still in the hotel. In total, more than a hundred people were rescued from the hotel. Among them are sixteen foreigners. It is not known from which country they come.