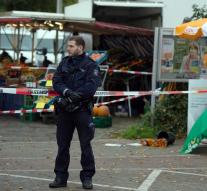 cologne - A candidate in the mayoral elections in Cologne Saturday attacked by someone with a knife. The 58 -year-old Henriette Reker , a campaign of its members and three others were injured thereby . According to police, two people have been seriously injured. It is unclear what has sustained injury Reker .

The stabbing occurred at a market in the district of Braunsfeld Cologne in a campaign booth of the ruling party CDU. The perpetrator was arrested. According to the newspaper Rheinischer Postal remained standing quietly after the act and said:,, I have to do this. I protect you all. ''

The elections for mayor in the city be held Sunday. Reker joins as an independent candidate. She gets support from the CDU, Greens and FDP, which have no candidates in the city itself.