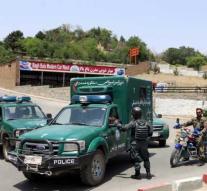 kabul - At least seven people were killed by a bomb attack at a meeting of Afghan clergy. They had just announced a fatwa against suicide attacks. The attack also injured at least nine people, reports the police.

The bomb exploded at the entrance of a huge tent in capital Kabul. It would be a suicide attack, committed by a motorcyclist. A senior government official came with a considerably higher death toll than the police. Seven clergymen, four security guards and three still unknown victims would have been killed.

Clergy from all over the country had gathered Sunday in the tent, where they condemned the ongoing bloodshed in the country. One witness said that most of the clergy had already left when the attacker struck. The responsibility for the attack has not yet been claimed. Afghanistan is regularly shaken by attacks, with many victims as a result.