Home / World / Attack of India on terrorist camp in Pakistan 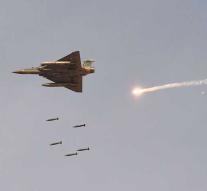 islamabad - The Indian Air Force has admitted that it has carried out attacks on terrorist camps in Pakistan on Tuesday. In doing so, Pakistani airspace was violated.

Anonymous sources from the Indian Air Force confirm via news agency ANI that twelve Mirage 2000 fighter planes dropped 1000 kilos of bombs at a terrorist camp of Jaish-e-Mohammed. There would have been 200 to 300 deaths.