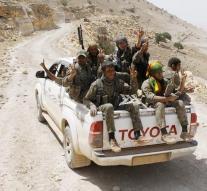 - A bomb attack on the northeastern Syrian town of Hasaka, which is largely in the hands of the Kurdish YPG, said Tuesday at least sixteen people died. A suicide bomber on a motorcycle blew himself up at a bakery, reported the Syrian Observatory for Human Rights. The death toll is probably because there are many cases severely injured.

Responsibility for the attack has not been claimed. The suspicion is soon off to Islamic State (IS), which repeatedly struck in the past in the area of ​​Hasaka. The city itself was spared in recent months.

Kurdish YPG militia, which controls most of the province of Hasaka, IS has in the past year on the defensive.