Home / World / 'Attack does not seem to be planned carefully' 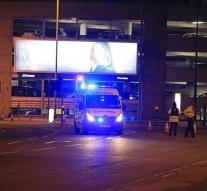 manchester - The attack in Manchester does not have the characteristics of a carefully planned, complicated attack, with multiple officers, extensive surveillance and advanced exotic explosives. That's what an American official told Reuters press office.

Earlier, American officials- anonymously- suspected that it might have been a suicide attempt.

'What is so worrying about these kinds of things is how simple it is to kill, injure and terrorize innocent people without distinction. The US is now plotting- with our partners- all available information to see if we missed something. '