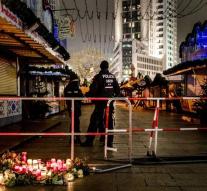 berlin - Germany has freed the man who was arrested because he was a possible contact of the suspected perpetrator of the attack on the Christmas market in Berlin. That left Justice Thursday. It is a forty Tunisian who was arrested in the district of Tempelhof, near the former airport of the capital.

The alleged offender, the shot dead by police in Milan Anis Amri, was also a Tunisian.

Justice in Karlsruhe, the prosecutor's office does in Germany terror cases Thursday gave an overview of the investigation into the attack so far. The Attorney General announced through a spokesperson among other things that the weapon that Amri Milan fired at police officers had the same caliber as the weapon with which the offender shot and killed the Polish driver of the truck that he drove the busy Christmas market.