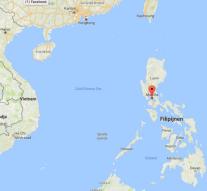 manila - At a resort in the Philippine capital of Manila, explosions and gunfire were heard on Thursday. About potential victims is not yet known. The police are on site with various anti-terrorist teams.

An IS warrior in the south-Philippine city of Marawi claims that combatants are involved in the attack. This city was recently attacked by Islamic State, the army has almost recovered the city.

Resorts World Manila is located right next to the airport. Next to the hotel there is also a shopping center, a casino and a cinema. Victims are not yet known.