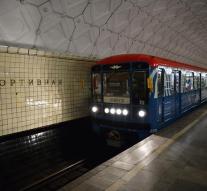 moscow - The Russian internal security service, FSB, arrested four people on Thursday that wanted bombings on public transport in Moscow. It's about Russian citizens coming from countries in Central Asia, reported news channel RT. They would belong to a network that is linked to the Islamic State terrorist group and were driven from Syria.

In April, the metro of the Russian city of St. Petersburg was the target of a bombing, committed by an ethnic Uzbek. Fifteen people were injured and over forty.