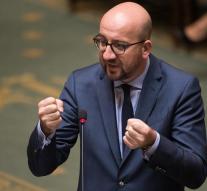 brussels - Budget negotiations in Belgium collapsed on the night of Monday to Tuesday. Prime Minister Charles Michel has forced his State of the Union ', which was scheduled for Tuesday, be postponed.

The Belgian federal government's emergency rate seeking billions because of a gaping hole in the budget. But the parties in the center-right government is mutually still out on the course to take. In particular CD \u0026 amp; V, the most left-wing party in the squad Michel (often called a kibbelkabinet in the Belgian press), put the heels in the sand.

Belgium must return by Friday its budget for next year by the European Commission. The government is looking at three billion euros in savings and tax increases. An earlier search of over 4 billion euros has now been abandoned.