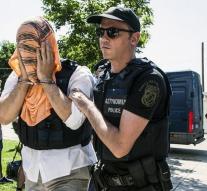 athens - A Greek court on Thursday rejected the request for extradition of two Turkish soldiers to their country of origin. They belong to a group of eight to Greece fled soldiers who participated in accordance with the Turkish justice to the violent coup attempt mid July.

The eight officers then flew by helicopter to the Greek city of Alexandroupolis, near the Turkish border. They have applied for asylum.

The Turkish military has argued that their lives are not sure if they are returned.