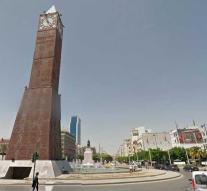 tunis - Because of the suicide attack in the center of the Tunisian capital Tunis, at least twenty people were injured. It concerns fifteen agents and five passers-by, says a spokesman for the security services. Most of them suffered minor injuries.

According to witnesses, the attack took place on Avenue Habib Bourguiba, one of the busiest streets in the city. A woman blew herself up at a police vehicle. 'I was at the theater and heard a huge explosion,' one witness said. Photos on the internet showed a huge column of smoke above the city.